Naturally, budgets haven’t kept pace with the increase in workload. One of the best ways maritime public safety personnel can stretch their limited amounts of vessels and personnel is to make sure they’re getting the most out of the technology they’re working with.

This is partially a matter of using technologies that will allow for efficient, effective 24-hour responses – thermal night vision cameras, radars, touch screen multifunction displays (MFDs), and even side-scan sonar.

But beyond the equipment itself is their integration. That is, making sure you’ve got gear on board that works together so the whole is greater than the sum of the parts.

Thermal imaging adds a sixth sense to the patrol environment.

The harsh, diverse, and ever-changing maritime environment places extraordinary demands on public safety personnel; using the right technology for the job is often the most effective solution possible.

Everything you see in normal daily life gives off heat energy (called a “heat signature”) day and night, in good weather and bad, even ice. As long as there is the tiniest bit of temperature contrast between an object and its background, you can see it with thermal imaging.

“Thermal imaging puts the officer in a position to respond proactively by seeing much of the unseen and developing a more effective enforcement strategy,” says Steven Beltran, Illinois Conservation Police Officer. “Simply put, thermal imaging adds a sixth sense to the patrol environment.”

Having a standalone thermal imager is no longer enough. To get the real force multiplication effect, thermal imagers must be tightly integrated with other onboard marine electronics.

Most thermal imagers are easy to integrate with touch-screen multifunction displays. Using these displays to control where the camera is pointing, displaying its output imagery against maritime charts or radar displays is a tremendous labor-saving device.

Couple that with the MFD’s integration to onboard radar systems, and now the vessel’s primary detection and navigation sensors are working together as an information source to detect potential hazards, visually assess their threat level, and formulate an appropriate response. 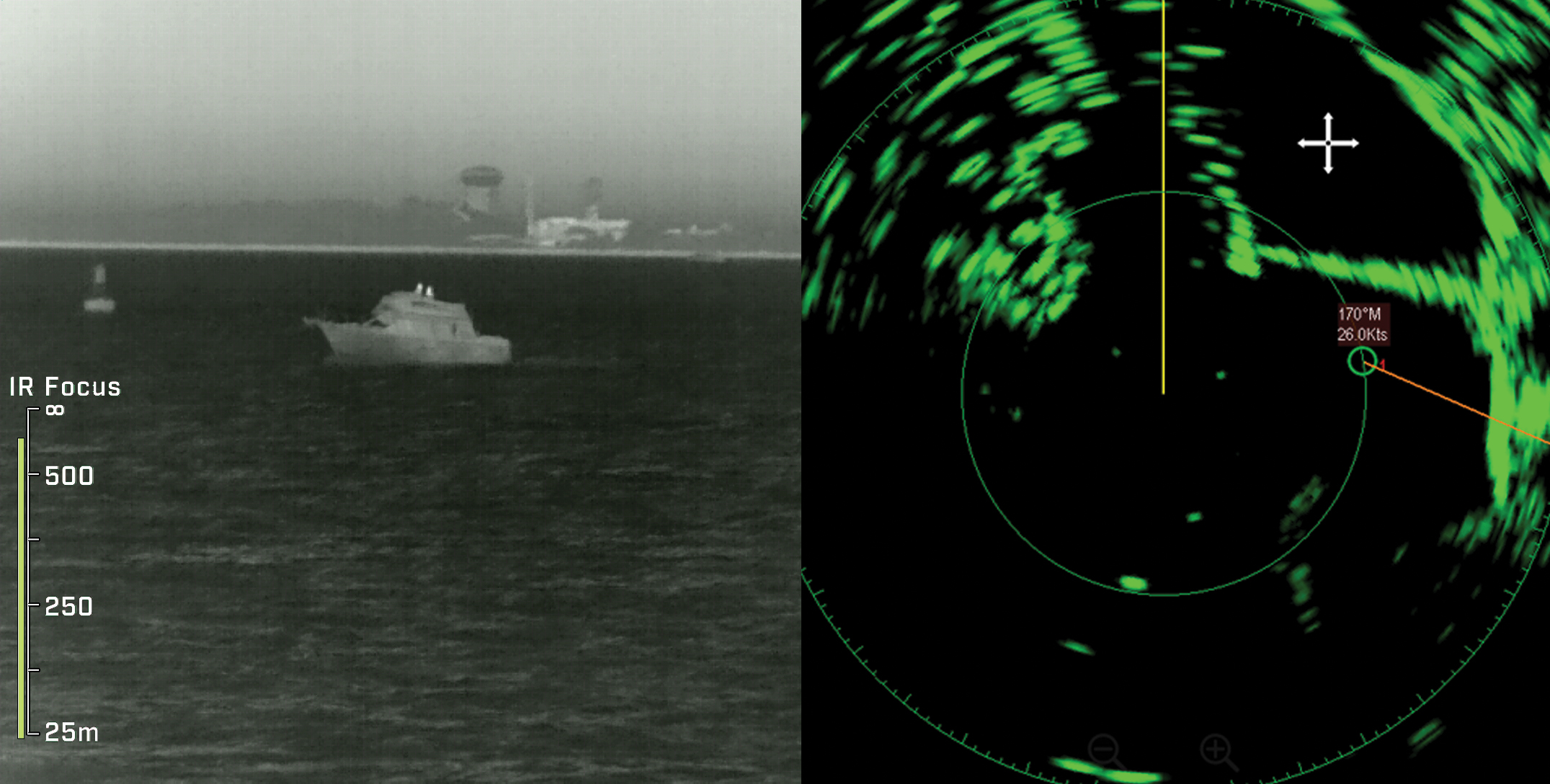 “A fully integrated suite of marine electronics including thermal imaging should be the cornerstone of any maritime patrol vessel,” Beltran continued. “The ability to work smarter, more efficiently, and with dedicated focus is paramount when trying to accomplish more with less. Efficiency on the water is vital when looking for a heat signature because timing is everything.”

Search patrols are commonly called off after the sun goes down. Not only does a thermal imager allow agencies to extend search hours into darkness, they also give officers an added safety margin when navigating back to the dock or ramp after the search is over.

Beltran is emphatic in his insistence that acquisition cost should not stand in the way of an agency investing in advanced technology: “A single search and rescue mission could pay for a thermal imager in man-hour savings alone, not to mention the ability to save a person’s life.”

A fully integrated suite of marine electronics including thermal imaging should be the cornerstone of any maritime patrol vessel.

Thermal cameras do things the human eye cannot. They see heat and do not depend on light to create an image, working as well or better at night than they do during the day. They can often see targets from much farther away than a person can because the human relies on light and contrast to see things, much like visible-light cameras and NVGs.

Simply put, for the police boat’s mission, thermal imaging cameras are vital partners to the work done by the human eye.

See In The Dark

Thermal imaging cameras see the heat signatures of people and vessels in total darkness, and through smoke, haze, and light fog. This capability gives operators an added margin of safety when responding to calls at night, allowing them to navigate confidently while avoiding floating debris, outcroppings of land, docks, pilings, and vessels on anchor. 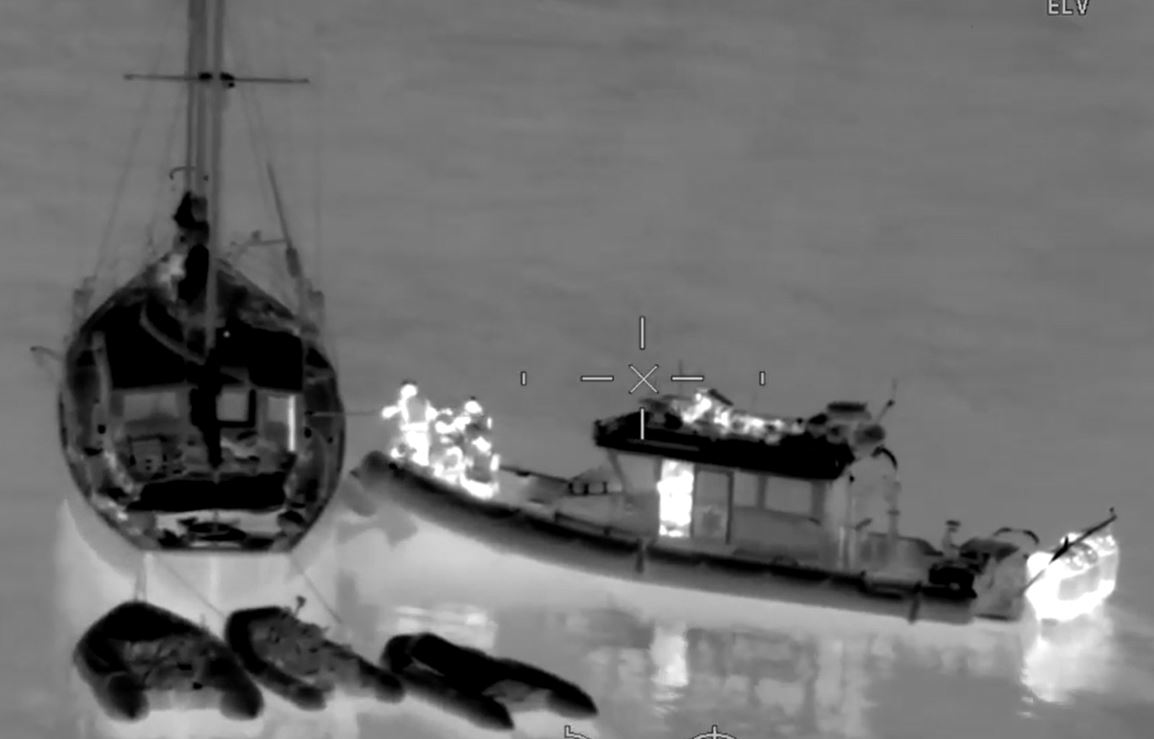 It also allows them to see what is happening on land without the need for extra lighting, supporting land-based officers while maintaining effective cordon and perimeter actions. Maritime operators using a thermal imager can monitor personnel in and around a crime scene or search area. This allows the maritime and shore-bound teams to work together more effectively and safely, as the boat crews can communicate possible safety issues to units in and around the search area.

For game spotting and anti-poaching operations, a thermal night vision camera allows officers to cover a greater area much more rapidly and effectively than the naked eye and a spotlight. “With a thermal camera it’s so much easier to see people, boats, crab pots, and animals,” said Heather Van Meter, an Oregon State Trooper with the Fish and Wildlife division. “Especially at night.”

The utility of maritime thermal imagers in the search and rescue role cannot be overstated. In a man overboard scenario, the head of a person floating in the water is often the only part that is visible; still, this shows up on the video display as a white ball against a black or dark gray background because their body heat makes them warmer than the water. This is as true at night as it is during the day, making them a crucial asset with true 24-hour response capability.

Managing a rescue mission on the water is a complex undertaking, made less so when using a thermal imaging camera. The thermal imager allows on-scene commanders to keep accurate track of victims and rescue personnel in the water alike. This improved situational awareness increases the safety of all involved. 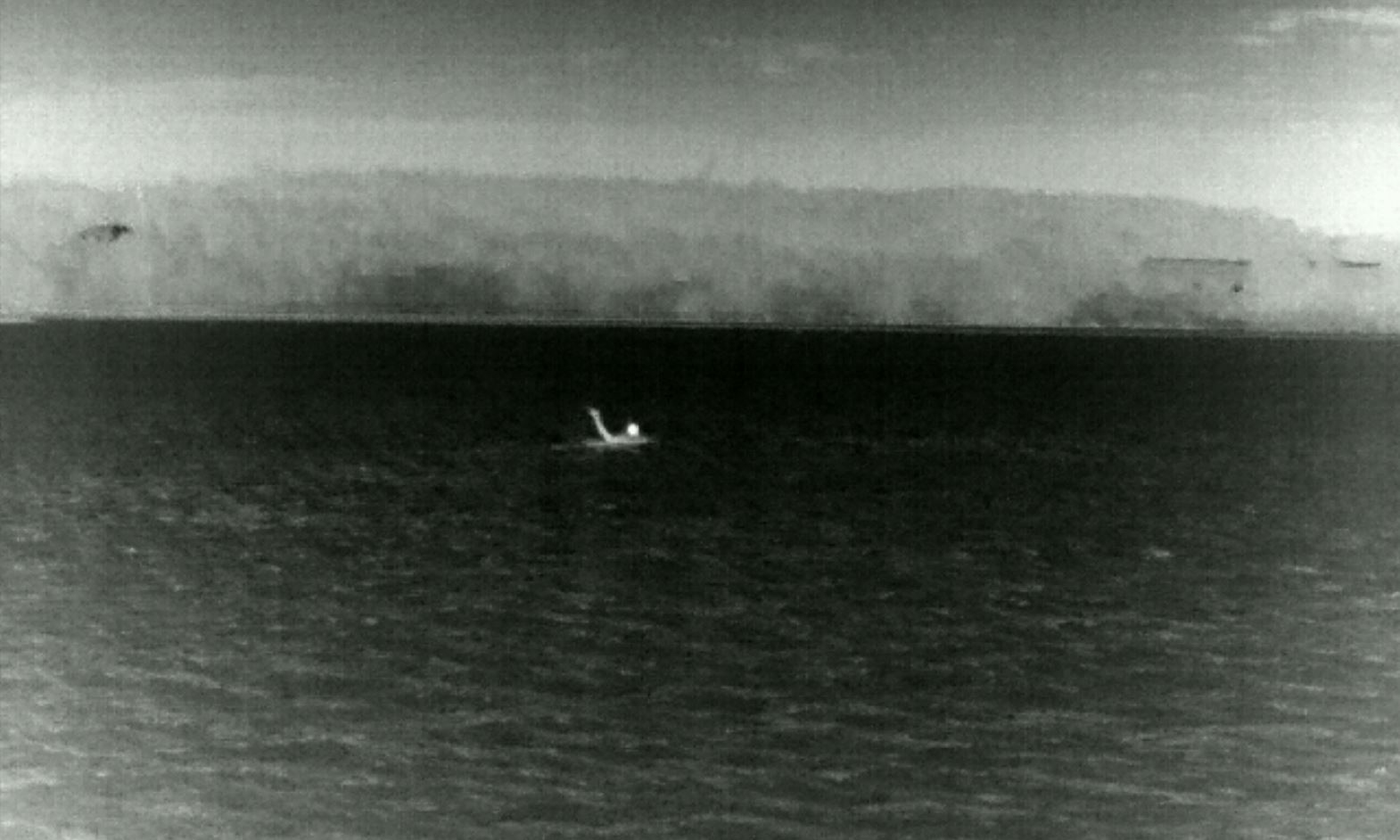 A thermal imaging camera can see things at night that pose a threat to a police boat’s safety, and the safety of her crew. When operating close to shore, the thermal imager gives the crew important awareness of their surroundings: how close the shoreline is, their distance from pilings or docks, and there is any debris floating in the area.

Thermal imaging cameras are vital pieces of equipment for maritime law enforcement. They expand the capabilities of police boats and their crew while permitting these important missions to be accomplished more safely and efficiently than ever before. 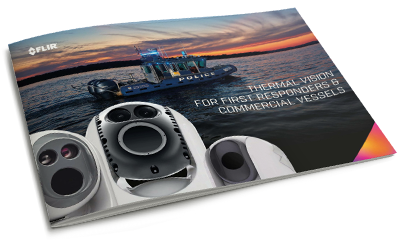