The difficulty of detecting water leaks on roofs, in walls, and along window and door frames is moisture isn’t usually visible to the eye. Even if a building repair professional finds a leak, they may not be able to determine its source or verify whether the repair is complete. However, businesses such as Shimura Kenso Building Repair have found that by adding thermal imaging cameras to their inspection and repair toolkits, they can not only find and repair leaks faster, but also provide their customers with the peace of mind that comes with knowing the moisture issue is resolved.

President Shimura of the Shimura Kenso building repair company became interested in thermal imaging cameras about eight years ago. A family business, Shimura Kenso began by offering painting services, and expanded into roof repair and waterproofing work as they gained recognition and trust in local communities. Now an expert in waterproofing buildings, Shimura is well aware how difficult the job can be.

“The conventional way of detecting wet parts is by using your own senses and experience,” he says, “but your senses can’t provide proof that the repairs fixed the problem, and doesn’t give you that peace of mind. Before, we were always worrying about how to find, repair, and explain a rain leak.”

Shimura knew that thermal imaging could visualize temperature differences and might provide the solution to his problem. If a thermal camera could clearly display both rain leaks and the results of repair work, it would be a major asset for his company.

He visited FLIR Systems Japan in Tokyo to try several potential cameras. After checking for accuracy and operability, he decided on a handheld FLIR E50bx, citing its “overwhelmingly high sensitivity” and “operational simplicity” as the reasons for his choice.

In fact, compared to other cameras he had tried, the FLIR E50bx was far more sensitive and performed much better in real-world scenarios. When walls and ceilings were wetted, the E50bx quickly sensed a change in temperature, reducing testing time and the amount of water needed before a leak could be visualized. Other products were slow to sense a temperature change, meaning much more water needed to accumulate before a leak could be detected.

Four years ago, Shimura added a FLIR T620 to his inventory for the inspection of external walls. His company now has three thermal imaging cameras to help them win large orders for inspection and repair work on large-scale buildings.

“Most of our work involves the use of thermal imaging cameras, so they are our company’s most essential items,” says Shimura.

IDENTIFYING THE CAUSES OF WATER LEAKS

The FLIR E50bx is still the camera they use to identify internal rain leaks and intrusion paths, as well as to check repairs. The company conducts water intrusion tests before and after a repair, and can take more than 100 thermal images in the process. These images are used not only to identify the causes of rain leaks and pinpoint the area that needs fixing, but also provide a way to explain to customers what the problem is and why a repair is needed. 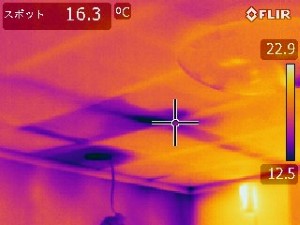 Thermal images shot during rain leak checks. FLIR thermal imaging cameras have high sensitivity, so both the water required and the testing time are minimized.

Another huge advantage of thermal cameras is that with the visuals provided by thermal images and moisture meters, customers can see for themselves that water leaks have been successfully repaired. The FLIR T620 is usually used to find external failures in buildings, like the uplifting of tiles, cold joints in mortar, and water leaks in siding. It’s not only effective as a non-contact tool to detect external wall defects, but it also provides a visual to help customers understand the risks posed by these faults. The company’s written reports always include thermal images, a practice that has helped them win large orders for rooftop repairs and full waterproofing of large-scale buildings.

In the future, Shimura Kenso plans to use their thermal imaging cameras to demonstrate the effects of thermal barrier and insulation coating of roofs and external walls. Using thermal images, they can provide a visual demonstration of the difference in surface temperature (and energy saved) before and after applying an insulating paint or other type of coating.

About 70% of the inquiries that Shimura Kenso receives are related to rain leaks, many specifically about fixing repair jobs that were done poorly by another company. When checking out the site for the first time, staff always take along a thermal imaging camera.

Shimura has a medical analogy for their building diagnosis and repair work: “There are no doctors who perform a laparotomy straight away on a patient with abdominal pain; first the causes are identified by medical interview, palpation, or X-ray examination, and then a plan is made before treatment,” he explains. “The same applies to buildings. The causes of rain leaks are identified by using thermal imaging cameras, and details of the leaks are provided to the customers by showing them thermal images we took. This not only differentiates our services from other companies but also reduces unnecessary work.”

Before beginning work, Shimura Kenso develops a construction plan with customers that is appropriate for the budget and house, backing up their plan with information provided by thermal images. Thermal imaging cameras make it possible for the company to accurately identify issues, carry out repairs with confidence, and offer a long-term guarantee that other companies can’t provide. Shimura says that their 10-year guarantee for waterproofing construction and the peace of mind they’re able to provide customers is greatest strength of the company.

Thermal imaging has another advantage—even if in a few years a rain leak occurs in a different part of the building, customers know it’s not the fault of the previous repair job. Shimura says they rarely receive complaints, because by seeing the thermal images themselves, customers can confirm that appropriate repairs were made during the previous job to stop the leak.

Customer feedback changed significantly after the company began providing thermal images before and after a repair as evidence of the quality of their work. In particular, the number of repeat orders and word-of-mouth orders has increased, indicating high satisfaction from clients. In the exterior construction industry, where competitive bidding is common, Shimura Kenso’s use of high-sensitivity thermal imaging cameras is a valuable feature that other companies don’t offer.

“Our mission is to do reliable, long-lasting work in local communities, so it’s no wonder that we need to rely on good tools,” says Shimura. “The high-performance thermal imaging cameras make sure that we are provided with more business opportunities.” With the company’s good reputation spreading and the local need for waterproofing increasing annually, Shimura plans to expand the company and increase the number of staff in the near future.