The spot pyrometer is also known as temperature gun or infrared thermometer. Because it works according to the same physical principle as a thermal camera, a spot pyrometer can be seen as a thermal camera with only one pixel. Such a tool can be very useful for many tasks, but because it only measures the temperature of one single spot the operator can easily miss crucial information. The high temperature of certain critical components that are near failure and need repair might go unnoticed. 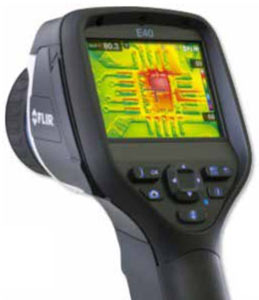 Use Thousands of Spot Pyrometers at the Same Time

What a spot pyrometer 'sees'. 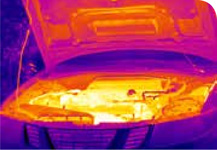 What a thermal imaging camera 'sees'.

What a spot pyrometer 'sees'.

What a thermal imaging camera 'sees'.

Save Time and 'See' the Heat

A thermal imaging camera not only gives you thousands of temperature readings, it also translates these readings into a thermal image. This conversion into an image results in a complete overview over the inspected equipment and allows the operator to immediately see small hot spots that would be easily missed with a spot pyrometer. Using a thermal imaging camera also saves time. Scanning large areas with many components using a spot pyrometer is a very time consuming task, because you have to scan every component separately. A thermal imaging camera can be used to check heat dissipation on printed circuit boards, to do quality checks or inspect thermal impact in the automotive sector, or to do failure analysis in the lab.

In order to accurately measure an object's temperature with a spot pyrometer the target object needs to entirely cover the measurement spot. This limits the distance from which temperatures can be measured accurately.

Another advantage of thermal imaging cameras compared to temperature guns is that they can accurately measure temperatures from larger distances. The distance at which a certain spot pyrometer is able to measure a target of a given size is often described with the “Distance to spot size ratio” (D:S) or ‘Spot Size Ratio’ (SSR). But where does that value come from and what does it stand for? The ‘spot size’ of a spot pyrometer is the smallest area that still can be measured accurately with the device. That means that the object of which you want to measure the temperature, also referred to as the target, needs to cover the entire spot size. The infrared radiation that is emitted by the target passes through the spot pyrometer’s optics and is projected onto the detector. If the object is smaller than the spot size, the detector will also be hit by parts of the radiation coming from the object’s surroundings. Hence, the device will not read the object’s temperature only but a mixture of the temperatures of the object and its surroundings. 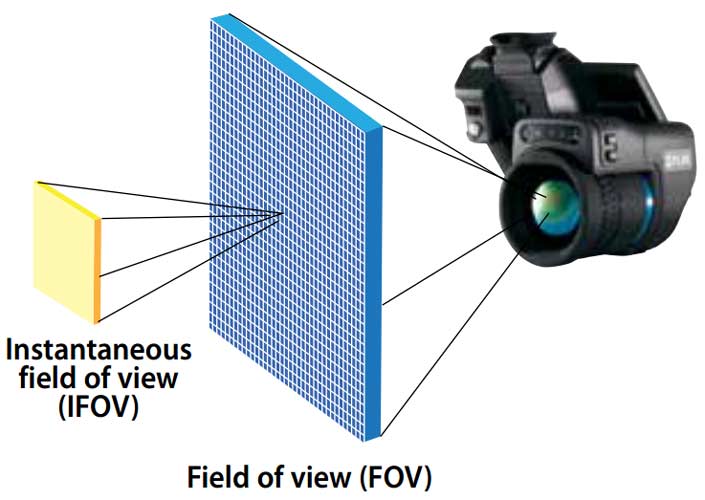 Thermal imaging camera producers usually do not specify SSR values to describe the spatial resolution of their products; but use instead the Instantaneous Field of View (IFOV). The IFOV is defined as the field of view of a single detector element of the camera’s detector array.

Theoretically the IFOV directly determines the spot size ratio of a thermal imaging camera. As the infrared radiation that is emitted by the target passes through the optics and is projected on the detector, the projected infrared radiation should completely cover at least one detector element, which corresponds to one pixel in the thermal image. So in theory covering one pixel in the thermal image should be sufficient to ensure correct temperature measurements. The IFOV is usually expressed in milliradians (one thousandth of a radian).

Thermal imaging cameras allow you to 'see' the heat.

The term radian describes the ratio between the length of an arc and its radius. One radian is mathematically defined as the angle formed when the length of a circular arc equals the radius of the circle. Since the circumference equals 2 π times the radius, one radian equals 1/(2 π) of the circle, or approximately 57.296 angular degrees and one mrad 0.057 angular degrees. In the situation where a thermal imaging camera is used to measure the temperature of a certain target we assume that the distance to the target equals the radius of the circle and we also consider the target to be rather flat. Since the viewing angle of a single detector element is small, we can assume that the tangent of this angle is approximately equal to its value in radian. Therefore, the spot size calculates as IFOV (in mrad) divided by 1000 and multiplied by the distance to the target.

Where the IFOV is expressed in mrad.

Using the formula you can calculate that a camera with an IFOV of 1.4 mrad will have a theoretical SSR of 1:714, so in theory you should be able to measure an object of 1 cm in diameter at a distance of more than 7 meters. However, as was stated previously this theoretical value does not correspond to real life situation, because it does not take into account the fact that real life optics are never completely perfect. The lens that projects the infrared radiation onto the detector can cause dispersion and other forms of optical aberration. You can never be sure that your target is exactly projected onto one single detector element. Projected infrared radiation can also ‘spill over’ from neighbor detector elements. In other words: the temperature of the surfaces surrounding the target might influence the temperature reading.

Just like with a spot pyrometer, where the target should not only cover the spot size entirely but should also cover a safety margin around the spot size, it is advisable to employ a safety margin when using a microbolometer thermal imaging camera for temperature measurements. This safety margin is captured in the term Measurement Field of View (MFOV). The MFOV describes the real measurement spot size of a thermal camera, in other words: the smallest measureable area for correct temperature readings. It is usually expressed as a multitude of the IFOV, the field of view of a single pixel.

A commonly used guideline for microbolometer cameras is that the target needs to cover an area at least 3 times the IFOV to take into account optical aberrations. This means that in the thermal image the target should not only cover one pixel, which in an ideal situation would have been sufficient for the measurement, but also the pixels around it. When this guideline is observed the formula to determine the spot size ratio can be adapted to take into account the factor of real optics. Instead of using 1xIFOV we can use the 3xIFOV guideline, which leads to the following, more realistic, formula:

Where the IFOV is expressed in mrad.

Based on this formula a camera with an IFOV of 1.4 mrad will have an SSR of 1:238, which means that you should be able to measure an object of 1 cm in diameter at a distance of just under 2.4 meters. This theoretical value is likely on the conservative side, because of the safety margin observed. The real life SSR might therefore be higher, but using these conservative SSR values the accuracy of the temperature readings is safeguarded.

In the ideal situation the projected target should cover at least one pixel. To ensure accurate readings it is advisable to cover a wider area to account for the optical dispersion of the projection.

Infrared energy (A) coming from an object is focused by the optics (B) onto an infrared detector (C). The detector sends the information to sensor electronics (D) for image processing. The electronics translate the data coming from the detector into an image (E) that can be viewed in the viewfinder or on a standard video monitor or LCD screen.

Spot pyrometers have an SSR that usually falls between 1:5 and 1:50. Most of the affordable models have an SSR of 1:5 to 1:10, while the more advanced, and therefore more expensive, models reaching SSR values up to 1:40 or even 1:50. Note, however that spot pyrometers also have the same problem as thermal imaging cameras when it comes to optics. When comparing spot pyrometer specifications you must know if the SSR number refers to the theoretical value or to the one which is compensated for the imperfection of the optics.

Detect Temperatures from a Distance

See Whether You Need to Move in Closer

Spot pyrometers also have challenges with measuring temperature on small objects. This capability is increasingly important for electronics inspection. As devices continue to get faster in processing speed, yet are required to fit into smaller packages, finding ways to dissipate the heat and identify hot spots is a real problem. A temperature gun can effectively detect and measure temperature, but its spot size is simply too large. However, thermal cameras with close-up optics can focus down to less than 5μm (micrometers) per pixel spot size. This allows engineers and technicians to make measurements on a very small scale.

A spot pyrometer can only give you a number. That number might be inaccurate, which leaves you guessing. A thermal imaging camera allows you to ‘see’ the heat, giving you not only temperature measurements, but also an instant image of heat distribution. This combination of visual information and accurate temperature measurements enables you to find faults quickly and accurately. Stop guessing, upgrade to a thermal imaging camera from FLIR Systems and start finding problems faster and easier. 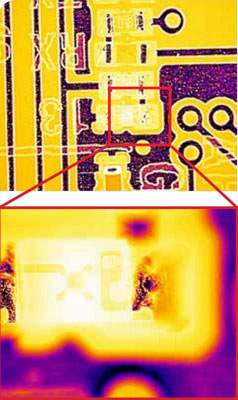 Close-up and microscopic lenses provide great image detail and allow you to measure small spots. This would be extremely difficult to do with a spot pyrometer. The top image was taken with a 4x close-up lens, the bottom image with a 15 micron lens.