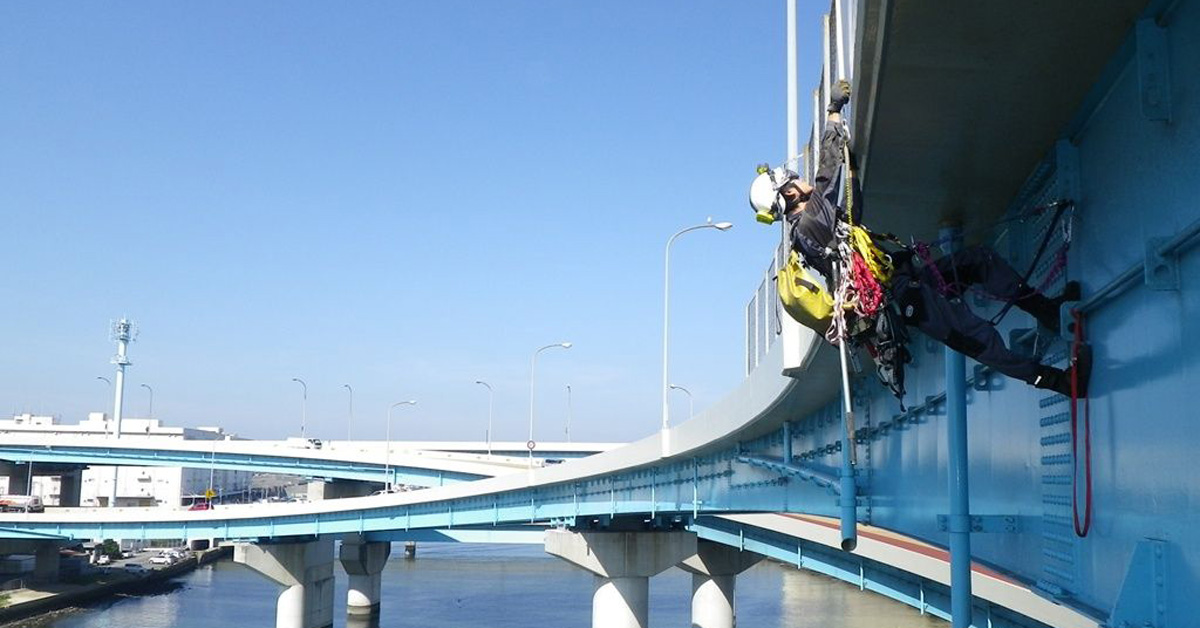 Concrete structures—usually typified by expressways—are the foundation of the infrastructure systems that make our lives richer and more convenient in modern communities. The construction of concrete structures has been further promoted under high economic growth. However, as these structures age and decay with the passage of time, they begin to impede safety when broken pieces of concrete and other building materials fall off and scatter.

Previously, hammering tests for the entire surface of expressway bridges and other concrete structures were performed as a maintenance countermeasure. In such work, the inspector uses a hammer to check for problems on site, particularly signs that concrete pieces are in danger of peeling away and falling off due to the corrosion of steel bars. But this method of testing has drawbacks, including safety issues due to the high-place work settings, the time required to set up and move the scaffolding, and the declining number of inspectors. 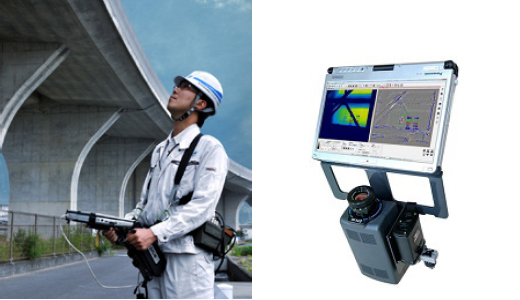 “The IrBAS is capable of photographing and diagnosing a wide area at one time by thermography, which helps dramatically reduce inspection time and effort,” says Mr. Hashimoto. When testing, it's extremely time-consuming to hammer all inspection points one by one on the concrete surface, which covers several thousands to several tens of thousands of square meters.

But with the IrBAS, healthy parts and abnormal parts of the structure are roughly selected before hammering, and only the parts diagnosed as abnormal are subjected to a hammering test. This procedure dramatically reduces the number of inspection points. In addition, the photographed data can be retained for later aging examinations.

Choosing the Best Technology for the Job

With the IrBAS, even if the object is far away, the inspector can shoot while standing on the ground by using a telephoto lens. This mechanism reduces the amount of high place work required and greatly improves the safety of inspectors. “The IrBAS classifies abnormal parts into three stages—caution, attention, and observation, which are identified using three different colors," says Mr. Hashimoto. "The image data are analyzed for temperature differences, shapes, areas, and other factors by a unique algorithm, to identify problems.”

In pursuit of an optimal inspection method, the team examined the impact on diagnostic results of differences between uncooled and cooled thermal imaging cameras, differences in wavelength used for measurement, and differences in parameters among various types of hardware, such as detectors and lenses. Such examinations turned out to be a study of thermography itself.

Starting with empirical research on the uncooling type, the team then studied the cooling-type QWIP and finally arrived at the indium antimonide type, which is sensitive to intermediate wavelengths.

The cooling type is more sensitive than the non-cooling type. Some units of the same cooling type are affected more than the others in a long wavelength band, by reflections from the sky or the opposing surface. These reflections affect the diagnostic results as a disturbance of acquired image data.

“We finally selected the indium antimonide-type thermography from FLIR Systems,” says Mr. Hashimoto. The FLIR A6701sc camera currently in use is an indium antimonide type, having a temperature resolution of 0.02°C and a wavelength of 3–5 μm.

Comparison of impacts of sky reflection:

But after many years of research, the team found that all parts judged to be healthy in diagnostic results with the IrBAS are confirmed as having no abnormality in subsequent hammering tests. As a result, the number of inspection points required has been reduced to a large extent. Furthermore, the IrBAS makes it possible to distinguish among different types of damage, such as floating, peeling, water leakage, and contamination by foreign substances.

“Through deep learning, we are seeking to increase the accuracy of the system not only to be able to make distinctions between sound and abnormal parts, but also to grasp the details of each abnormality, by further expanding the inspection results as teaching data," says Mr. Hashimoto. "Furthermore, we will introduce an analysis server, build an automatic judgment system, and utilize AI.”

Concrete structure diagnosis of bridges can be applied to general roads, railways, and buildings, as well as to expressways. Learn more about FLIR solutions for infrastructure safety and maintenance: www.flir.com/security/total-solutions-for-critical-infrastructure