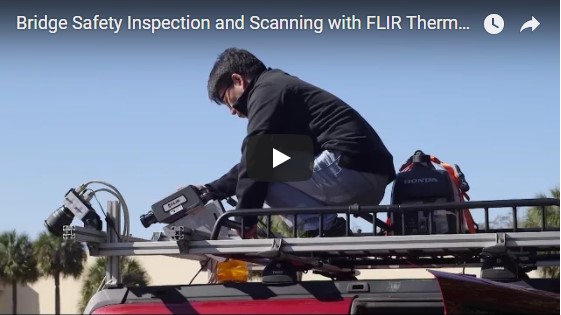 Civil engineers have a big problem on their hands: tens of thousands of bridges across the United States have been in use long past their 50-year design life. According to the Federal Highway Administration (FHWA), approximately one-quarter of the 611,845 bridges across the US are structurally deficient or functionally obsolete. These bridges will require significant maintenance, repair, or replacement, at an estimated cost of $20.5 billion annually over the next 12 years.

The traditional methods currently used to identify structural deficiencies in concrete bridge decks can be time-consuming, inaccurate, and unsafe for both inspectors and drivers. These methods rely on an investigator’s subjective assessment. They also require bridge lane closures during the survey, blocking or severely slowing traffic. However, a new high-tech method that combines a mobile infrared camera with analytical software offers a solution that is safer and more objective.

Two major factors in concrete bridge damage are delamination and spalling. Delamination is the separating of concrete into layers, or the separating of the top coating from the substrate. Embedded reinforcing bar (rebar) corrodes over time, causing expansion that splits the concrete either horizontally through the layers (delamination) or into chunks that break off above the damaged area (spalling).

Finding concrete delamination typically involves a form of non-destructive testing (NDT) called acoustic chain drag inspection. The inspector drags a heavy chain across the bridge deck, listening for the distinctive hollow sound produced by delaminated areas. He can then use this data to create a delamination map of the bridge deck.

There are disadvantages to the chain drag method. Even though this type of inspection involves shutting down the lane under survey, inspectors are frequently required to work alongside open traffic lanes. The traffic noise makes it difficult to distinguish sounds the chain makes as it crosses delaminated concrete. In addition, the chain drag method relies heavily on the knowledge and experience of the inspector, making it subjective and potentially inaccurate. In fact, an FHWA study of deck delamination surveys concluded that the chain drag method did not consistently provide accurate results.

A high-tech alternative to acoustic chain drag inspections uses a truck-mounted infrared camera to pinpoint delaminated areas on concrete deck surfaces. NEXCO-West USA developed this NDT inspection technique, which incorporates images from a cooled FLIR infrared camera into maps created with NEXCO-West’s proprietary software. Company engineers are now working with the University of Central Florida to develop objective and efficient bridge inspection procedures that could be used by state highway agencies across the US. 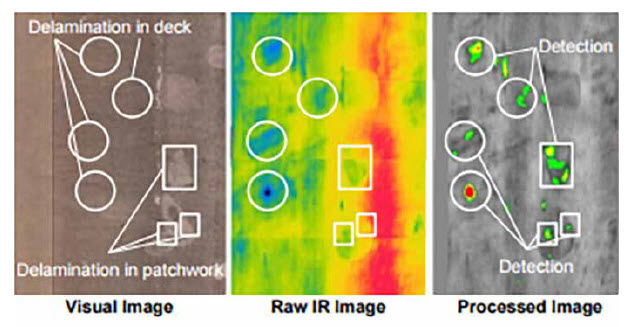 “NEXCO-West’s approach to testing for bridge delamination is a mobile method, using an infrared camera installed on top of the vehicle,” says company President and CEO, Masato Matsumoto. “Our approach does not require lane closures or speed limit reductions, so it keeps traffic flowing while simultaneously keeping inspectors safe.”

Scans are usually performed during the day or within a few hours after sunset, when large temperature shifts can be observed. For example, concrete that heated up during the afternoon will begin to cool down after sunset, creating a measurable change in temperature. Most of the deck will heat or cool evenly, but delamination interrupts the conduction path. The temperature of the damaged concrete will rise more rapidly during the day and fall faster at night, which is easily detected by the IR camera. 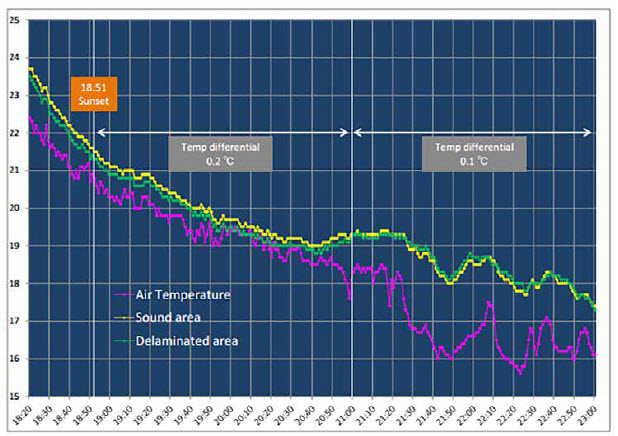 Inspections are performed with a truck-mounted infrared camera while driving across the bridge at 50 miles per hour with traffic. Matsumoto says it only takes a few minutes for the infrared camera to record an entire scan of one lane of a one-mile long bridge.

The camera employed in NEXCO-West’s scanning system is a FLIR A6701sc MWIR science camera. “We use the A6700 series camera because it can photograph high resolution thermal images while driving at high speed,” explains Matsumoto. This camera’s cooled Indium Antimonide detector offers integration times as fast as 0.48 μs, allowing the team to record 640 x 512 pixel thermal images without any motion blur. Matsumoto says they typically set the camera for a 10 Hz frame rate, which allows it to record a crisp thermal image every two meters at highway speed. The camera is connected to a laptop inside the vehicle that is running NEXCO-West’s Infrared Bridge Assessment System (IrBAS) software, so the team can see real-time analysis and recognize potentially delaminated areas. 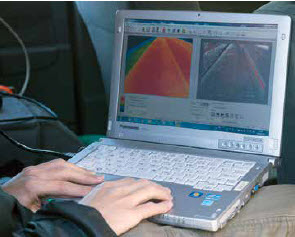 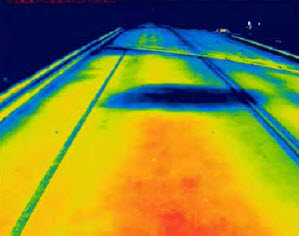 After the team has collected data on each lane of the bridge, they can begin processing it. “Most of the data analysis and reporting processes are automated by the IrBAS software, which saves significant time and cost preparing deficiency maps,” says Matsumoto. The software uses the deficiency map to calculate the percentage of delaminated deck area and then classify the condition states based on American Association of State Highway and Transportation Officials (AASHTO) criteria.

There are three damage categories: 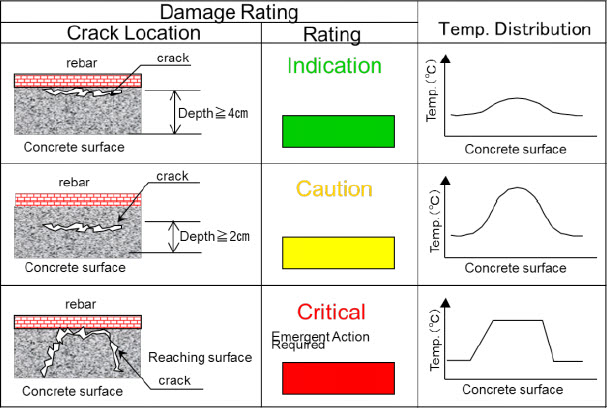 An additional advantage to NEXCO-West’s comprehensive and objective data collection method is it allows state highway agencies to monitor long-term bridge performance. “NEXCO-West’s infrared mapping will support data-driven decision-making for bridge management and ultimately, will help bridge owners avoid expensive catastrophic repairs,” Matsumoto says. By superimposing deficiency maps onto earlier records, engineers would be able to determine the condition and rate of degradation on bridges. This would help them predict the progression of deterioration and make plans for rehabilitation work.